Winemaking is often against the odds given wherever in the world it takes place. Unpredictable weather patterns or climatic suitability may be par for the course dependent on location, so it may seem a little surprising that for centuries viticulture has thrived, if precariously, on the potentially dangerous sides of Sicily’s notable active volcano, Mt. Etna. 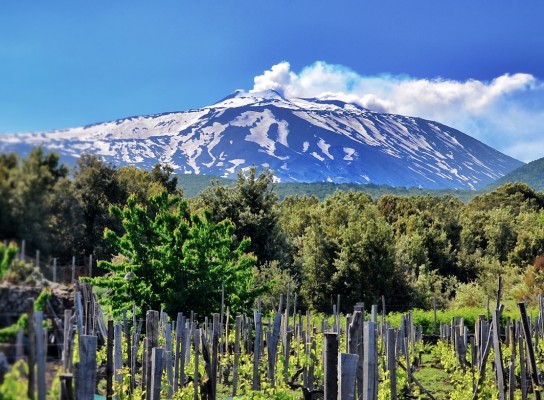 Even more surprising, perhaps, is that the Etna DOC is regarded as an area where fine wine can confidently be produced and that the late Giacomo Tachis , the oenologist who spearheaded the ‘SuperTuscan’ phenomenon of the ‘80s and ‘90s, predicted that Sicily’s Mt. Etna would soon be regarded as something akin to the wine world’s ‘second Burgundy’.    Admittedly plantings of Chardonnay and Pinot Noir co-exist on today’s Etna slopes alongside the DOC’s permitted native vine varietals, Nerello Mascalese, Nerello Cappuccio and others, but was Tachis’ prediction so far-fetched after all?

Having included an Etna Rosso DOC wine at a recent Sicilian tasting, I couldn’t wait to find out.

What was certain at the end of that tasting was that this massive volcano with its hugely complex volcanic soils brimming with minerality has furnished Sicily its most convincing tastes of ‘terroir’. Maybe, given one’s preconceptions of fiery volcanic heat the delicacy and finesse in the glass of the classic wines of the area comes as a bit of a shock – but of course altitude, hence relative coolness, together with marked swings of diurnal temperatures plays into the scheme of things on Mt. Etna.   Admittedly there is plenty of evidence of half-abandoned properties of indeterminate age on Etna’s slopes, vineyards having suddenly and peremptorily been overtaken by historic lava flows across many years, but paradoxically the very complexity of the soil patterns ‘across the piste’, so to speak, has been significant in underpinning consistency of style overall. Volcanic soils offer a friable crumbly bed for vines to thrive in of course, but up on the slopes it is ‘do it yourself’ territory – no machine harvesting – so I dare say prescriptions for a good back rub are frequently prescribed locally to the vineyard work forces. Etna Rosso DOC 2015 from Benanti Viticoltore is not the wine I showed at the tasting I mentioned but it is certainly true to type, the blend here being 80% Nerello Mascalese/ 20% Nerello Cappuccio.  First impressions?   A light ‘developed’ colour in the glass despite the wine’s relatively recent vintage; an attractive translucent red not dissimilar to what one might expect of a slightly older Pinot Noir.   Delicacy on the nose – softly and ripely fruited. No apparent oak.   A well-balanced dry palate in the same vein, supported by the finest-grained tannins and rounded off by a medium length finish. Prospects?   Certainly enjoyable now in its comparative youth but having a worthwhile medium-term cellarage potential.   Food matches?   Given the wine’s finesse and delicacy I’d place it as a very good partner to veal dishes – also excellent alongside soft cheeses – even lightly blue creamy ones like Gorgonzola dolce.   Definitely worth investigating!