I was momentarily tricked recently when noticing a bottle label bearing the prominent name ‘Saint-Amant’ into believing that this was an obscure French Appellation I’d somehow overlooked.   Maybe I had subconsciously confused it in my mind with the Burgundian ‘Saint Amour’, one of the ten Beaujolais ‘crus’.    Further examination revealed that the name referred simply to a family-run Domaine in the general neighbourhood of Gigondas, their wine in this particular case being a Viognier blend falling into the general Côtes-du-Rhône Villages. 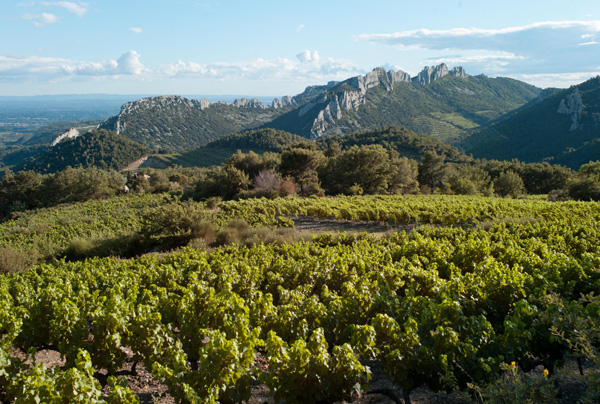 I’ll admit I’m writing this on the hottest day in south-eatern Britain since 1911, so I’m wondering if London is currently exceeding some of the regular autumn temperatures in the frequently baked area of the southern Côtes du Rhône responsible for Domaine Saint-Amant   ‘La Tabardonne’ 2012.    An open question perhaps as the vineyards for this predominantly Viognier-based white wine lie at altitude a stone’s throw from Les Dentelles de Montmirail.  This dramatic jagged outcrop, a geological ‘lacework’ of multifolded Jurassic limestone in Vaucluse  boasts the mountain ‘St Amand’ as its highest point, rising to around 730 metres asl.    In high summer I dare say one could grill a steak on the rocks surrounding the sun-trap vineyards of the region in general, though altitude has a moderating effect on temperature.  ‘La Tabardonne’ 2012 is composed of 90% Viognier and 10% Roussanne, the vines up here basking on terraces of relatively fertile but very free-draining scree and sand/limestone soils at altitudes between 350 and 500 metres that force vine-roots to dig deep in search of precious moisture.    Yields are consequently low.   Let’s simply say that ripeness and higher levels of alcohol are pretty well assured in the wines from these parts.

But let’s put this particular example to the test.

On the eye the wine is limpid, the palest honey colour, and the nose is truffly with a complex of aromatic undertones – herbaceous, peachy, with hints of vanilla in the background, all of which are carried forward to the mid-palate which also reveals a lovely creaminess of texture, that, and the smidgen of vanilla in the total picture presumably being the result of oak maturation.    ‘La Tabardonne’ is certainly a well-structured wine with plenty of personality and, I’d say, a wine that could be enjoyed either for itself or as the perfect partner for a wide range of food.  Foie gras leads the pack in my view, but terrines and charcuterie, poultry dishes ( a suggested recipe below), a wide range of cheeses  –  firm-textured white fish like monkfish or swordfish, and even lightly spiced dishes like tagines.  As an ‘International Wine Challenge’ prizewinner the wine’s price point is surprisingly modest given the faithfulness of its taste to its variety, and it certainly qualifies as my wine choice for October.

A dish to echo the light spicing of ‘La Tabardonne’:

an onion spiked with 2 cloves

a bouquet garni – thyme, parsley, bayleaf, celery stalk, plus a couple of stems of tarragon

a pinch of saffron strands, steeped in a few tbsps. of boiling water

Truss the bird with string and put in a large pan together with the onion, carrots and bouquet garni.   Pour in sufficient chicken stock or water and white wine to cover – add seasonings – and bring up to a boil on the hob.  Once boiling, cover the pan and reduce the temperature to a trembling simmer, skimming the surface from time to time to lift off any impurities.

Allow this to happen for around an hour,  You’ll find the bird is tender only by piercing the thigh with a fork.  It should come out perfectly clean.

When done, remove the bird from the pan, untruss it,  discard its skin and cut it into neat serving pieces.   Reserve them, and keep them warm.

Skim any excess fat from the cooking liquid in the pan, strain it into a clean pan and reduce it by fast boiling until you have about 750ml of a more concentrated stock.  Check seasoning.rice

Heat a tbsp. of oil in a heavy-based casserole, add the chopped onion and cook at a low temperature, stirring until translucent, not browned.

Add the rice, and continue stirring until it, too, becomes transparent, having absorbed the oil.     At this point add the reserved reduced cooking liquid, the saffron and its own liquid, and add seasoning of salt and pepper.

Cover the casserole, and simmer over a very gentle heat for about 20 minutes until all the liquid has been absorbed into the rice.

Remove the casserole from the heat and let it stand for 10 minutes, covered, while the rice continues to plump up.

Add the chicken pieces to the rice in the pan, cover and reheat gently for a minute or two.

Serve hot from the casserole, optionally adding a sprinkling of grated cheese to each dish.