Two offerings are up for consideration this month, perhaps with an eye to the festive season ahead.

It is hard to imagine any other country in the world possessed of the natural advantages that Chile provides for winemakers – ‘a viticultural Paradise’ no less, with a Mediterannean-style climate and access to cooling coastal breezes off the Pacific plus a wide range of different growing areas where, crucially, its classic vines ‘mainline’ into the vineyard slopes ungrafted thanks to the complete absence of phylloxera. If Bordeaux is France’s classic area for Cabernet Sauvignon, then Chile’s Alto Maipo region mirrors it in the New World. 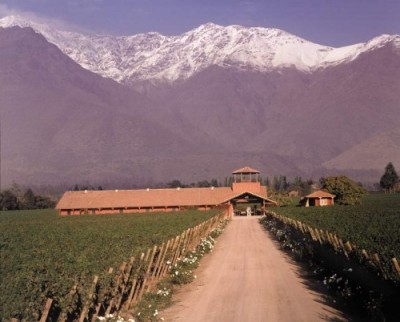 The results show in Corte Ignacio Cabernet Sauvignon 2013 from Concha y Toro, crafted exclusively for The Wine Society by Chile’s leading winemaker, Ignacio Recabarren. My findings? Deeply claret-coloured with the merest hint of browning at the edges, the wine’s nose is initially cedary with an underlay of velvety Cabernet cassis. Before having tasted it I wondered if what I was swirling in the glass would betray a kind of New World over-ripeness once hitting the palate, but no, there was both restraint and freshness and the sense of a very complete wine, a little gentle oak, but absolutely idiomatic as to varietal style and beautifully balanced from its fragrantly spicy beginning to its silky end. Textbook stuff, and not in the least upstaged by its generous alcohol content. It is well worthy of being shown off swirled in a roomy glass alongside composite meat dishes, game, or well-flavoured hard cheeses. Tasted ‘blind’ I might have confused it with a Cabernet from, say, Penfolds, and I would have placed its price point well above the £13.50 the Wine Society is asking for it. In short – highly recommended!

Initially delicious though many cheaper bottlings of dessert wine may appear to be, freshness can sometimes be at a premium and one can often find a slightly cloying characteristic that either limits their versatility or, worse, one’s full enjoyment of them. I had been looking for an exceptional value dessert wine to place on the festive table that had equally a ‘cut’ of fresh acidity that could enliven even the richest of Christmas puddings – and I’ve found an ideal candidate! A Late Harvest Tokaji Furmint 2015 from Hungary. Furmint may not be the most familiar grape variety in the general scheme of things, but it is a time-honoured classic, and is used exclusively in the production of Tokay wines from simple late-harvest bottlings to fabulous ‘elixir’ rarities like Tokaji Essencia or Tokaji Aszú at the very pinnacle of Hungarian dessert wine production.

Given both its basic status and its shelf-price my discovery doesn’t belong in the pantheon of Hungary’s ‘greats’ but falls into a category that once used to be called Tokaji Cuvée – you may even find a few bottles still bearing that label although ‘Late Harvest’ is a clearer modern description. Complex rules and regulations apply to Tokay wines above this level but strangely enough there are no official guidelines determining the ageing of these simpler wines. Although picked late, the grapes are still at a point when freshness can be accented in a wine that is finely balanced between a tingling acidity at the top, a textured and softly sweet apricotty middle, and a lightly honeyed finish. Under a slew of ownerships across the ages this wine’s producer Chateau Dereszla enjoys a history of winemaking in the Tokaji region that stretches back to the early 15th century….and experience tells.

Afterthought: Well chilled down, this would also make a delightful Christmassy off-dry aperitif.

I really enjoyed following the course.  Colin is a great instructor and very passionate.  Please would you thank him for me.