Cabernet Sauvignon from Coonawarra in South Australia and a recipe for marinaded barbequed lamb are John Ducker’s recommendations for May.

Having recently spent a fortnight with a lively group of people attending a couple of weekend conventions in Australia, some other organized activities were looked for on ‘days off’.   A lunch in Melbourne with my Australian host was already booked in my diary the following day, however the notice of a (clashing) organized tasting down in the Mornington Peninsula had been posted under my hotel room door during the previous night. An opportunity, I reflected ruefully, that I’d now have to miss. Considering I had already visited vineyards there on a previous visit to Australia, a ‘duty’ lunch in Melbourne didn’t seem too great a hardship after all. Imagine my surprise and delight when on meeting my host at the appointed time he suggested we had lunch a winery ‘nearby’. “Its not far from the City” he told me, “besides which I’m sure your tasting muscles could do with a bit of exercise.”     One learns very quickly that words like ‘nearby’, or phrases like ‘just down the road’ take on a completely different meaning in Australia.

Our lunch destination turned out to be some 20 miles distant from Melbourne down the M1 towards Geelong, in this case the Shadowfax Winery in the coastal flatlands around the Werribee Park, but this is not a review of their wines, a range of which we sampled before tucking in to a wonderful Mediterranean-style lunch spread at their top-rated restaurant.   I did learn one surprising wine-making innovation here, however: Matt Harrop, the chief winemaker, takes care to play loud music 24/7 in the close proximity to the vats of his fermenting musts simply in order to create beneficial vibrations in the infant wine. “Don’t the neighbours mind?” I asked.     “No worries” he says, “our nearest neighbours are well over three miles away”.   Yes – Australia = space! And that’s no more than the truth.

My wine choice for May is equally Australian, though not from Victoria but South Australia’s Limestone Coast – and notably good value too if reports I have already read of it are correct.

Axis Coonawarra Cabernet Sauvignon 2014 hails from one of Australia’s most famous early classic vineyard areas.   Originally a very small region, Coonawarra’s reputation especially for its ‘Bordeaux-style’ Cabernets from vineyards on iron-rich terra rossa soils has now led to an inevitable expansion beyond its heartland strip and consequently to legal contests over the rights to the usage of the Coonawarra name beyond it. Nothwithstanding this outward push and the vast sums of money spent on lawyers, the wider Coonawarra style still remains a consistent factor as terra rossa outcrops are fairly extensive here in what is largely reclaimed swamp land. 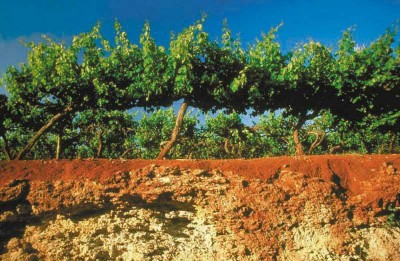 Now closer to home, and having secured a bottle to taste on your behalf, my glass shows an immediate swirl of clear ‘tears’ above the garnet-coloured liquid below, and my nose encounters a very attractive aroma suggestive at first, if very subtly, of chocolate-coated mint creams! The palate is quite dry and seems at first less characterized than the wine’s nose suggests. The weight and substance in the mouth ticks the ‘light to medium’ box, and there’s gentle fruit with a good acidity, backed by a frame of softly grainy tannins.   The wine exhibits a very good balance overall and, remembering that classic Cabernet Sauvignon (at least in terms of a Bordeaux blend) takes a little while to knit itself together in bottle, this particularly youthful South Australian ‘screw-cap’ single-varietal example has obviously been constructed for shorter-term drinking.   As the wine begins to open up and reveal itself in its true colours I find that the Cabernet essentials of flavour show more roundly and, happily, the wine finishes well. Axis Coonawarra Cabernet Sauvignon 2014 certainly deserves its recent good press as a Coonawarra ‘original’ in a lighter style – let alone for its surprisingly good value for money.

As a food-wine varietal I have always valued Cabernet Sauvignon as an ideal partner for dishes of lamb, particularly those warmly comforting ‘fall off the bone’ slow-cooked daubes and stews – but then maybe I’ve simply confused our relative seasons during my time away. Australia is currently heading into winter when such comforts might be needed, and surely here in the UK we should be concentrating on an influx of British summer recipes (winter warmers like daubes and stews, maybe?).   Plus ça change!

Listen out to the weather forecast!

Here’s an easy-cook lamb dish that adapts very well to a summer barbecue – just add a crisp salad alongside.

juice and zest of a lemon

Combine all the marinade ingredients, reserving half of it to use as a sauce on the cooked meat.   Cover the meat with the remainder in a deep non-metallic dish, turning it occasionally and allowing it to soak happily for at least an hour in the fridge.

When ready, shake off any excess marinade from the meat and cook on a medium-hot barbecue or a ridged griddle pan, allowing 3 to 4 mins on each side – or more if you like your lamb less ‘pink’.     Add salad alongside – your choice!