Spring not yet in sight here in the UK?   A warming spicy red calls for attention, perhaps – but a word of warning: don’t be alarmed either by the name of my February ‘pick’ or, particularly, its offbeat cartoon label design: a retro Superman summoning delivery of a glass of this wine to his space ship! 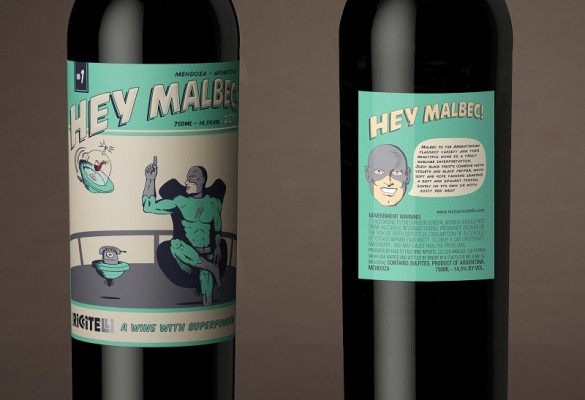 Its surprisingly unvarnished title aside, Hey Malbec! 2016 is real wine, properly crafted, and tastes ‘the business’!   This is 100% low-yielding Malbec from vineyards in the foothills of the Andes at between 980 and 1120 metres asl. in the coolest heartland of Argentinian wine production, Lujan de Cuyo, Mendoza.

The funky ‘in your face’ front label is certainly a lesson to all of us in not to judge a book by its cover, while the back label isn’t shy at extolling the virtues of the bottle contents: ‘Juicy black fruits combine with violets and black pepper, with soft and ripe tannins leading to an opulent finish’.   Label writers beware! I am reminded of the story told of the hugely influential French wine merchant and gastronome, the bon viveur André Simon, who was accosted once at a London wine tasting by an enthusiastic colleague who pressed him to try the wine he himself was sampling. “André, you simply must try this”, he was told, “ it tastes wonderfully of violets!” “Maybe, my friend, but then how would I know? I’ve never eaten a violet in my life”.   The gentle put-down aside there’s an object lesson here maybe for all those who communicate wine professionally – speak of what you actually know at first hand.

But back to the wine – crafted here from Argentina’s ‘flagship’ Malbec grapes by Matias Riccitelli, son of one of Bodegas Norton’s former key winemakers- drawn from three separate plots across over fifty acres of vineyards hosting some vines planted early in the 20th century – deeply rooted ‘vielles vignes’ indeed.  A larger proportion of ‘Hey Malbec!’ is vinified in cement tanks, the remaining 30% being finished in French oak, softening in this particular case the otherwise raw tannic ‘heft’ that some younger examples of Malbec can leave on one’s palate.  Characteristically dark-hued, Malbec is basically a French grape variety introduced to Argentina in the 19th century known as Cot, producing in its homeland the classic so-called ‘black wine’ of Cahors.

That this particular wine finishes softly is much to the credit of its winemaker, and the word ‘opulent’ used in its description is not misplaced once the wine has been allowed sufficient breathing time.  Drinking well now, I think I might cellar some in order to chart the ageing progress of this relatively recent vintage. As it currently stands the wine has good balance and suggests itself as an admirable juicy/savoury partner in the context of that other well-known export from the Argentine – beef.   The bottle label’s retro Superman doesn’t appear to have ordered food to go alongside his glassful so I’m attaching an equally retro recipe for a simple but savoury meat loaf, first published in the Milk Marketing Board’s ‘Pennywise Cookbook’ (1973) which I have little doubt would be perfectly compatible.     Whatever he himself might have chosen to eat alongside, Superman obviously knows a sound red wine with development potential when he sees it!

Serve hot with sautéed potatoes and broccoli, or cold as a picnic with crisp salad, cornichons and good crusty bread alongside.