On the ‘Value for Money’ wine front one lives and learns!   I had been commissioned recently by an exclusive Surrey wine club to furnish them with an upmarket tasting of Californian wines. I had been given a suitably generous budget into the bargain in the light of where the weaker pound currently sits alongside the well-fleshed US dollar.

My wine choices ranged widely from notable Napa Valley ‘names’ to attempts by idiosyncratic and innovative lifestyle winemakers living in ‘La-La Land’ to turn wine into arcane philosophy!   Alongside these I injected a sprinkling of wines that I hoped would prove interesting regardless of reputation or quirkiness, though one of these was certainly a rarity – a Mondeuse – an ancient vine variety originally from the French Dauphiné region, translated (with success) to the Mount Veeder AVA of Napa Valley – impressively ripe thanks to Californian sunshine.   A couple of wines in the lineup were certainly beyond my own personal pocket and, in order to inject a little ‘wine-cost-versus-value’ perspective into the tasting, I included an entry-level blockbuster red blend, and an accessible Pinot Noir from Monterey. The latter, obtainable in the UK from Waitrose, found great favour with my audience who, having tasted their way through the ‘price-tag’ wines pitched it nem. con. as costing far more than the relatively modest £14 at which it sells over here.   Maybe you won’t be surprised that it is my recommendation as July’s ‘Wine of the Month’.

Price-differentials?   Many non-wine factors jostle with wine factors in the cost of the bottle on the shelf: actual production and distribution costs, obviously; wine-hype in the press; the wine merchants’ ‘lift’ as they must make a profit too.   Then there’s the rarity value vs. volume production equation to consider let alone the cherished reputation of a notable estate or producer – and, classically, the inescapable hierarchical pricing of fine Bordeaux and Burgundy vintages, moving inexorably upwards, or so it seems.   A category, I suggest, beyond the everyday target of the most cost-conscious wine drinker.

What, then, is value for money? Does it relate to the factors above or simply to ourselves? Is the VFM factor any more than a wine that you’ve discovered you like very much and feel well able to afford?   Fortunately we all have our own particular tastes and preferences – and if they are tailored to the depths of our pockets then so be it.   After all there’s much to be said for ‘evaluating’ what we have in the glass rather than drinking it thoughtlessly, so here’s my sixpenny-worth on this month’s choice: 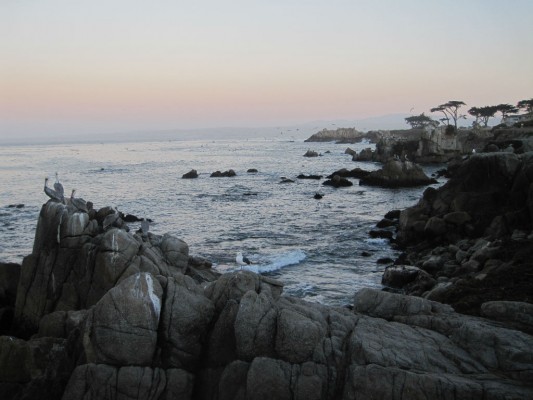 A waggish member of my audience who had lived and worked around the Bay area suggested that the wine might taste of sardines, a local speciality, but luckily we found this was far from the case!     On the eye, the wine has the reassuring colour, limpidity and transparency of Pinot Noir but as the grape variety is so clonally diverse it is sometimes difficult to know what to expect of its taste.   Stylistically Fog Head Reserve is on the ripe side. The nose is attractively complex – red-fruited notes alongside the gentlest oaky spice and warm earthiness – very inviting.   The palate is mid weight and well balanced, the influence of oak is well integrated and the classic Pinot Noir character seems perfectly true to type, with its usual charm – the 2013 vintage having allowed time for development of softness and complexity overall.   One can understand why Californian wine drinkers forsook Merlot and embraced Pinot Noir – which reminds me to catch up again with the film ‘Sideways’ via YouTube!

I really enjoyed following the course.  Colin is a great instructor and very passionate.  Please would you thank him for me.