Now January is here I make no apology for writing-up a wine that qualifies as my very best drinking in 2016, though discovered too late for inclusion as a ‘wine of the month’ for December.

I have always enjoyed the wines of the Rhône Valley, white or red, though my personal budget doesn’t always allow me access to the top Domaines of, say, Châteauneuf du Pape as part of my regular drinking.   And yet one could well be fooled into thinking that, tasted blind, Lirac AoC Cuvée de la Reine des Bois Blanc, Domaine de la Mordorée falls into that elevated category.   Sun-baked limestone terraces of the garrigue are common to all the local wines around Lirac and neighbouring Tavel, as is the warm Mediterranean climate. 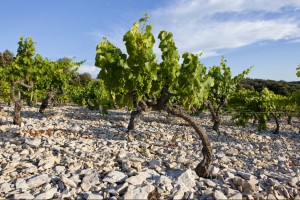 Only about 5% of Lirac AoC wine is white. Proportions of the grape assemblage varies between producers and doubtless the conditions of each harvest, however in this case the blend is led by Viognier with five further supporters, Grenache Blanc, Picpoul, Clairette, Marsanne and Roussanne.

The producers, the Delorme family, now celebrate a decade since their property’s status moved up a notch from from the agriculturally sustainable culture raisonnée to fully organic, the Domaine covering around forty separate parcels on varied soils in both the appellations of Châteauneuf du Pape and Lirac itself.

As one of the most precisely balanced wines it has been my pleasure to encounter, this white Lirac offers a wealth of very subtle complexity. Though the initial impact seems dry there’s Viognier flesh on the palate with an array of ripely succulent fruit and (almost) a hint of herbal honey in the background.     Put to the test alongside Christmas lunch the wine’s acidity provided a brilliantly judged ‘cut’ alongside the richness of roast goose, and I am told its complexity shone equally alongside the lobster au beurre enjoyed by a non-meat eating family member.   Other reviewers have used even more expansive terms in writing up this truly exciting and very sophisticated triumph from the winemaking Delorme family – they are not wrong! La Mordorée? It’s the French for woodcock, denizens of the local vineyards and forests, an image of one of which appears on both the bottle label and neck capsule of the Domaine’s wines.

Lovely relaxed informative tuition. Should have done the 8-session course.