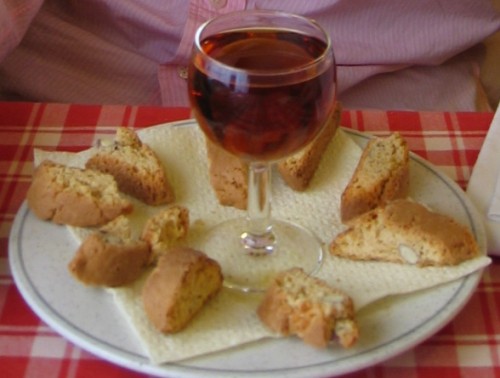 Amber nectar for Christmas?   I’m suggesting that of the world’s many dessert wines and ‘stickies’ Tuscany’s time-honoured Vin Santo could be a candidate, basically a wine produced from grapes that have been dried on straw mats.     That rather bald description is deficient is several respects however, as the wine styled either as Vin Santo or Vino Santo (‘Holy’ wine) may be produced by that name in other parts of central Italy, and may vary wildly in terms of sweetness or dryness.   The practice of making dried grape wines may well have derived from ancient Greece, grapes having been dried either on or off the vine originally to result in wines with higher sugar levels that were comparatively stable, making them capable of being transported for sale elsewhere without spoilage, closures of early wine containers frequently being ill-fitting.

The unbroken tradition of making Vin Santo in Tuscany goes back many centuries and has been practised by many top estates let alone by countless individual smallholders eager to make their own. Although other grape varieties are allowed the usual model involves both Trebbiano and Malvasia in perfect ripe condition i.e. no evidence of rot. The grape bunches are laid out loosely on straw mats to be dried naturally in the hottest, though airiest part of the building, i.e. up near the rafters, the aim being to minimize any risk of rot and to encourage flavour complexities induced both by oxidation and subsequent barrel ageing.   The DOC rules for Vin Santo specify a minimum of three years spent in barrels without racking, though the most traditional producers allow much further ageing.    The particular example I have is Vin Santo di Montepulciano 2013 from a third generation family estate, a blend of 90% Malvasia and 10% Grechetto – so to performance:

In appearance the wine is a pure lustrous amber colour, with a rich raisiny nose and a quite exceptionally intense mouth-filling palate with wonderful natural sweet ripeness underpinned by plummy depths. Impressively textured in the mouth, the wine’s natural sweetness is held against a balancing acidity, and there’s complexity too, enhanced by a long lingering finish.     This would be a fine contrasting partner to really strong fermented curd cheeses (the French Époisses comes to mind)…. blue cheeses too, perhaps the Italian gorgonzola piccante…. but of course the wine is utterly delicious just by itself or indeed with cantuccini biscuits (see recipe below) .

In Tuscany at least, tradition dictates that little almond biscuits known as cantucci or Biscotti di Prato should be dipped into one’s post prandial glass of Vin Santo as they are eaten, and while these are now commercially available in larger supermarkets these days I must admit to making my own.   They are relatively simple to prepare and – if I say so myself – they taste absolutely authentic.     Here’s the recipe:

a separate cigar-shaped log.    Flour a baking sheet and place the four ‘logs’ well apart on it, as they will spread a little in cooking.   Anoint each one with the egg yolk/milk glaze.

Bake for 15- 20 minutes when the ‘logs’ should be a good golden colour.

Remove from the oven and allow to cool a little, but while they’re still warm cut them across diagonally into slices about ¾ inch wide.

Arrange the slices on their sides separately on a baking sheet and return them to the oven for a further 5 minutes in order to dry them out.   Remove them from the oven and let them cool completely on a wire rack.

NB:   These cantucci keep very well in an airtight container.

Really enjoyed the course I took in London recently. The tutors were excellent and really knew their stuff. I'd recommend Wine Education Service courses to anyone.